What Are the Differences Between Neanderthal Skulls And Human Skulls?

Paleontologists have long studied Neanderthal skeletons. They are thought to be the earliest human species that lived in Europe and western Asia. However, it has always been a mystery why their skulls do not look like our own. What’s more, they lived in the same place for hundreds of thousands of years before modern humans made their way out of Africa. 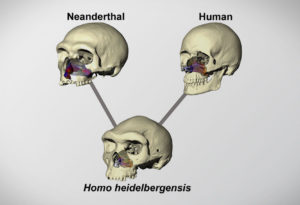 The development of brain size and cranial capacity is one key element in identifying what distinguishes humans from Neanderthals. Another way to identify what makes us different from our predecessors is through teeth. Differences regarding tooth shape and size between humans and Neanderthals can be traced back to their evolution from a common ancestor.