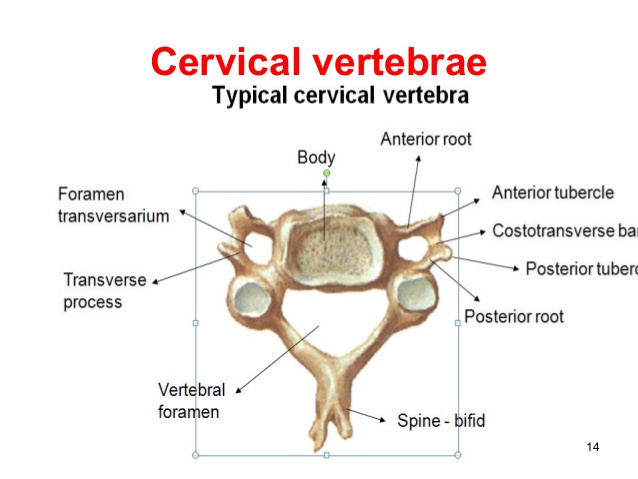 Bony Structures
The typical cervical (C3-C7) vertebrates pedicles are short and project posterolaterally. They are attached to the body midway within its upper and lower borders so that the superior vertebral notch of the typical cervical (C3-C7) vertebrates is as deep as the inferior.
The laminae of the typical cervical (C3-C7) vertebrates are long, narrow, and thinner above than below. They curve posteromedially.
The spinous process is short and bifid. Because the spinous processes are so short, certain superficial muscles (trapezius and the splenius capitis) attach to the nuchal ligament rather than directly to the vertebrae; the nuchal ligament connecting to the spinous processes of the C2-C7 and the posterior tubercle of the atlas.
The superior and inferior articular processes of cervical vertebrae have fused on either or both sides to develop articular pillars, columns of bone that project laterally of the junction of the pedicle and the lamina.
The articular facets are flat and of an oval appearance:
Superior articular facet faces backward, upward, and slightly medially.
Inferior articular facet faces forward, downward, and slightly laterally.
The transverse processes of the typical cervical (C3-C7) vertebrates are short, which, in the upper six cervical vertebrae, gives access to the vertebral artery and vein, and plexus of the sympathetic nerves. Each transverse process consists of an anterior and a posterior part. These two parts are joined, outside the foramen, and passage of the corresponding spinal nerve.
The anterior part of transverse processes is the homologue of the rib in the thoracic region and is therefore named the costal process. It arises from the side of the body of the vertebrae, is directed laterally in front of the foramen, and ends in the anterior tubercle.
The posterior part of transverse processes is the true transverse process, is directed forward and laterally; it ends in a flattened posterior tubercle.

The atlas (C1), is the uppermost vertebra, differs from the other cervical vertebrae, its chief peculiarity is, it has no vertebral body and no spinous process. The atlas (C1) also has an articular facet anteriorly, which connects with the dens of the axis. 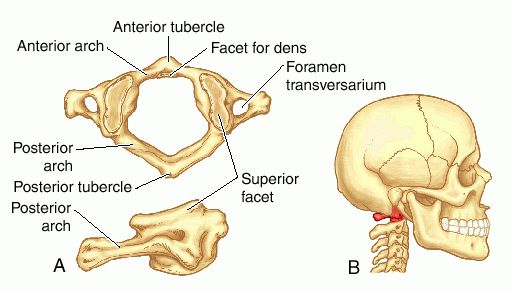 The atlas possesses lateral masses on each side of the vertebral arch, that provides an attachment for the transverse ligament of the atlas.
The posterior arch possesses a groove for the vertebral artery and the C1 spinal nerve.

The axis (C2) is undoubtedly identifiable due to its possesses dens (odontoid process) which continues superiorly from the anterior portion of the vertebra.

The dens articulate with the articular facet of the atlas, forming the medial atlantoaxial joint. These joints provide for rotation of the head independently of the torso. 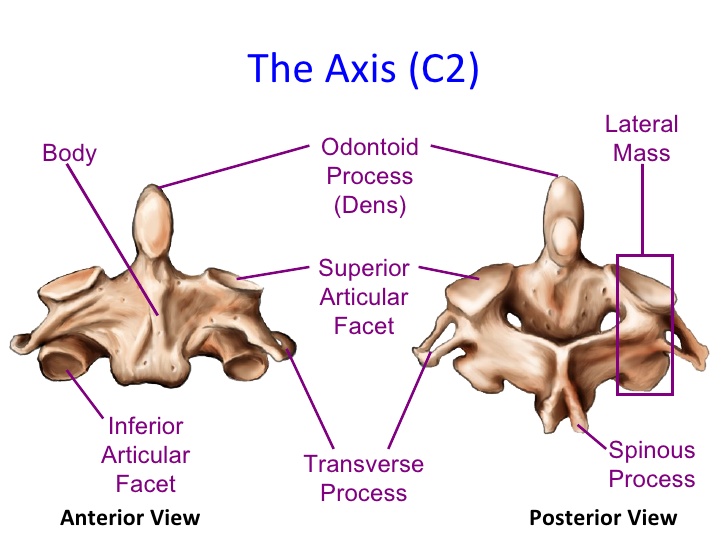 The body of the axis is deeper in front than behind and prolonged downward anteriorly and the axis overlaps the upper and front part of the third cervical vertebra.

The cervical spine is flexible; It is too much at risk for injury from intense sudden movements, such as the whiplash-type injuries. The high risk of whiplash-type injuries is because of the limited muscle support that subsists in the cervical area, and the spine has to hold the weight of the head. This is plenty of weight for a small, thin set of the cervical spine and soft tissues to bear. The sudden, sharp head movement can cause damage.