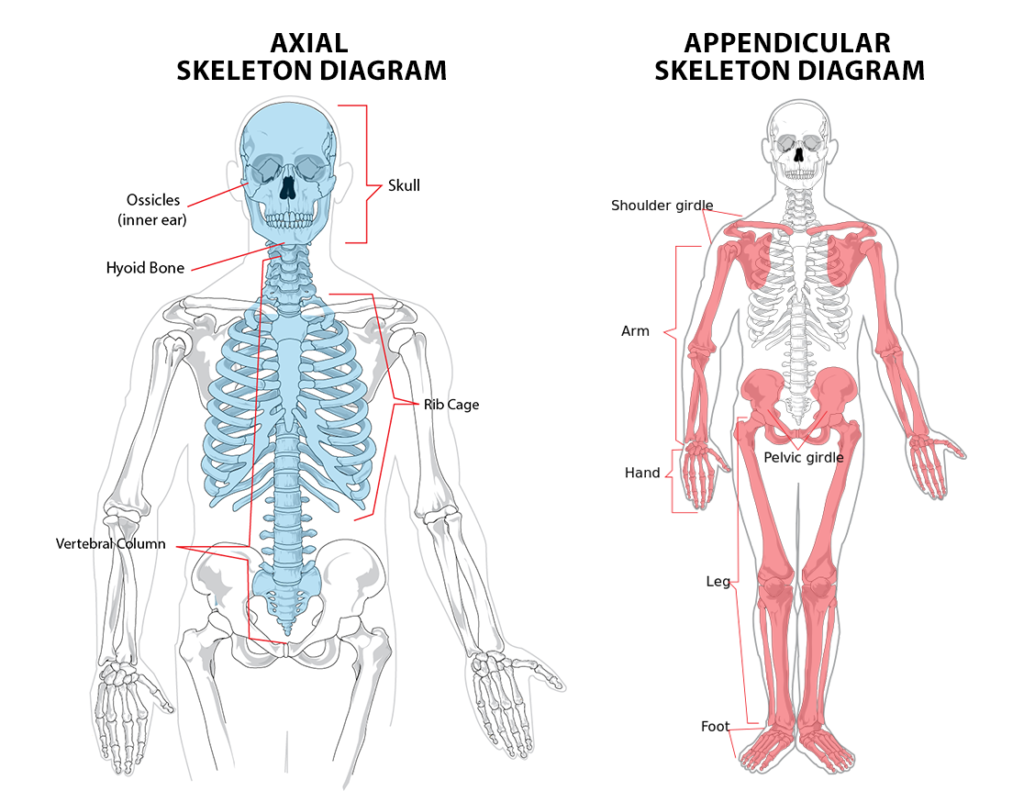 The axial skeleton contains 80 bones.
29 bones in the head – 8 cranial, 14 facial bones and 6 auditory ossicles and the Hyoid Bone.
26 bones in the vertebral column (24 vertebrae, the sacrum, and the coccyx)
25 bones in the thorax – (the sternum and 24 ribs)

The skull consists of the cranium and the facial bones. The cranium contains and protects the brain in a space designated the cranial vault. The cranium is composed of eight bones which fit together at connection points called sutures. Cranium bones-
Sphenoid
Ethmoid
Frontal
Occipital
Two Temporal
Two Parietal
People are born with separate plates which succeeding fuse to provide flexibility as the skull passes within the pelvis and birth canal throughout the birth. Throughout development, the eight separate plates of the immature bones join collectively into one single structure identified as the Skull. The mandible, only bone that remains separate from the rest of the skull.

There are 14 facial bones that form the lower part of the skull. The facial bones include-
Vomer
Mandible also is known as the lower jaw
Maxilla, which is paired, which make up the upper part of your jaw
Zygomatic, which are also paired bone and are the bones that give you your cheekbones
2 lacrimal bones
2 nasal bones
2 Palatine bones
2 Inferior nasal conchae

The rib cage is comprised of 12 pairs of ribs and the sternum. The rib cage protects the vital organs such as the heart and lungs. The ribs are crescents like shaped, among one end is flattened and the opposite end is rounded. The rounded ends of the ribs are joints to the thoracic vertebrae and the flattened ends come together at the sternum.

The uppermost seven pairs of ribs join to the sternum with costal cartilage and are recognized as “true ribs.” The 8th to 10th ribs have non-costal cartilage which attaches them to the ribs above. The last two ribs are described “floating ribs” because they do not connect to the sternum or to other ribs. The length of each rib extends from number one to seven and then declines pair number 12. The first rib of the thoracic cage is the shortest, widest, flattest, and most curved.