Hyoid Bone: The only bone in the human body is a hyoid bone, which is not attached to another, is horseshoe like shaped, which hangs in the neck muscles. The human hyoid bone works synchronically with the tongue and the larynx to deliver the effective speech as it is effective for the movement of many tiny muscles while guarding the esophagus and additionally permit the action of swallowing to take place. 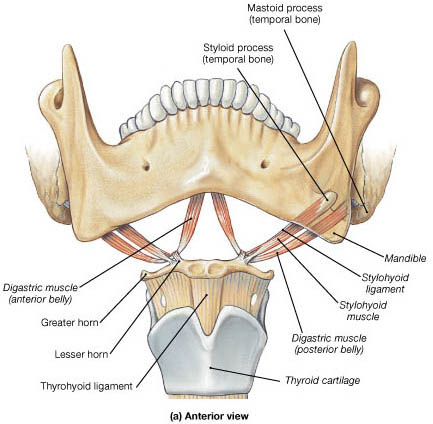 The hyoid bone is made of a body, two greater horns, and the two lesser horns:

Body – The region involving the center of the bone is
identified as its body. The body has an anterior convex surface and a posterior concave surface. The body of the bone serves as an anchor to some important neck muscles.

Greater Cornua/horn – These pair of horns, conical in shape,
projects from each end of the body in a posterior, superior and lateral
direction. They are superior and more lateral in the lesser
cornua. They help attachment to numerous neck muscles like the thyrohyoid muscles and the stylohyoid muscles. 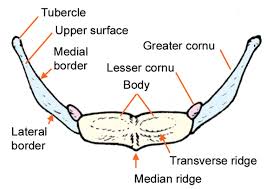 Lesser Cornua/horn – arises from the superior aspect of the hyoid bone, from the base of the greater horn. Lesser horns are a pair of smaller conical protrusions located more in the upwards direction. The attachment of lesser horns takes place of fibrous tissues. A ligament distinguished as the stylohyoid ligament adheres itself to the apical end of the lesser horns.

The hyoid bone is unique not supported with any articulation; the hyoid bone suspended in place by the muscles and ligaments that attach to it.
1. Muscular Attachments: The hyoid bone anchorage of numerous muscles of the larynx, pharynx, floor of the mouth, and epiglottis. These muscles can be classified –

a. Muscles of the oral cavity and pharynx

2.Ligament Attachments
The ligament acts to support the position of the hyoid in the neck. These three chief ligaments that attach to the hyoid bone –

Various branches originating from the external carotid artery, lingual artery and the branch of superior thyroid artery identified as the infrahyoid branch, are capable of the vascular supply of the hyoid bone.

The hyoid bone is liable for an appendage of the root of the tongue. It helps the tongue movement, such as speaking or swallowing.

It anchors the hyoglossus muscles for forming a hole in the tongue so as to expand the oral cavity.

During swallowing, takes place, the geniohyoid and mylohyoid muscles lift the bone as thoroughly as the mouth’s floor synchronically. Being supported by other muscles such as digastric and styloid muscles, the tongue is pressed towards the palate and therefore the food is pushed backward.